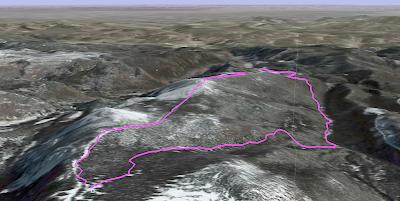 This trip follows the traditional Guinn Mountain Route, however we took the Jenny Creek Loop and met back up with the Guinn Mountain Hut Trail. We then continued on towards the Guinn Mountain Hut. While we were at the hut we met some folks who had come to the hut via the Corona Bowl Backcountry Access Point. Seeing that we had our Eldora passes on us, we decided to try that route back to Eldora. you are following a natural gas pipeline, and there is obvious clear cutting that you stay between. For those more adventurous, try shoot off to the left before a major descent and you will be rewarded with some nice turns in an open bowl.

As you are hiking through the clear cut, you will always see Bryan Mountain off in the distant. Once you get to the mountain, depending on the season, you will need to hike or skin back up to Bryan Mountain. There should be some trail created as you are now getting closer to Eldora. Hiking up is the only way to get to Eldora, don't be fooled into trying to hike to the north or south to get around it. After a few false ridges, you will start to see antennas and probably good tracks. We saw numerous people touring back there as we approached the resort. Eventually, you will enter the resort right above the Corona lift, of course, we have season passes.

Of all the hikes I've done, this is by far the best route to take. It is very scenic, and allows for more access to great skiing. It took a good part of the day, but it was well worth it.

variations on this hike: